Interstellar space even weirder than expected

Interstellar space even weirder than expected

The spacecraft is just the second ever to venture beyond the boundary that separates us from the rest of the galaxy.

IN THE BLACKNESS of space billions of miles from home, NASA’s Voyager 2 marked a milestone of exploration, becoming just the second spacecraft ever to enter interstellar space in November 2018. Now, a day before the anniversary of that celestial exit, scientists have revealed what Voyager 2 saw as it crossed the threshold—and it’s giving humans new insight into some of the big mysteries of our solar system.

The findings, spread across five studies published today in Nature Astronomy, mark the first time that a spacecraft has directly sampled the electrically charged hazes, or plasmas, that fill both interstellar space and the solar system’s farthest outskirts. It’s another first for the spacecraft, which was launched in 1977 and performed the first—and only—flybys of the ice giant planets Uranus and Neptune. (Find out more about the Voyager probes’ “grand tour”—and why it almost didn’t happen.)

On August 17, 1981, the Voyager 2 spacecraft flew within 5.5 million miles of Saturn’s rings, capturing a spectacular false-color view in visible light and ultraviolet.

Voyager 2 completed its final planetary flyby on August 25, 1989, as it zoomed by Neptune—capturing this haunting glimpse at the planet’s deep blue atmosphere.

Voyager 2’s charge into interstellar space follows that of sibling Voyager 1, which accomplished the same feat in 2012. The two spacecrafts’ data have many features in common, such as the overall density of the particles they’ve encountered in interstellar space. But intriguingly, the twin craft also saw some key differences on their way out—raising new questions about our sun’s movement through the galaxy.

“This has really been a wonderful journey,” Voyager project scientist Ed Stone, a physicist at Caltech, said in a press briefing last week.

“It’s just really exciting that humankind is interstellar,” adds physicist Jamie Rankin, a postdoctoral researcher at Princeton University who wasn’t involved with the studies. “We have been interstellar travelers since Voyager 1 crossed, but now, Voyager 2’s cross is even more exciting, because we can now compare two very different locations … in the interstellar medium.” 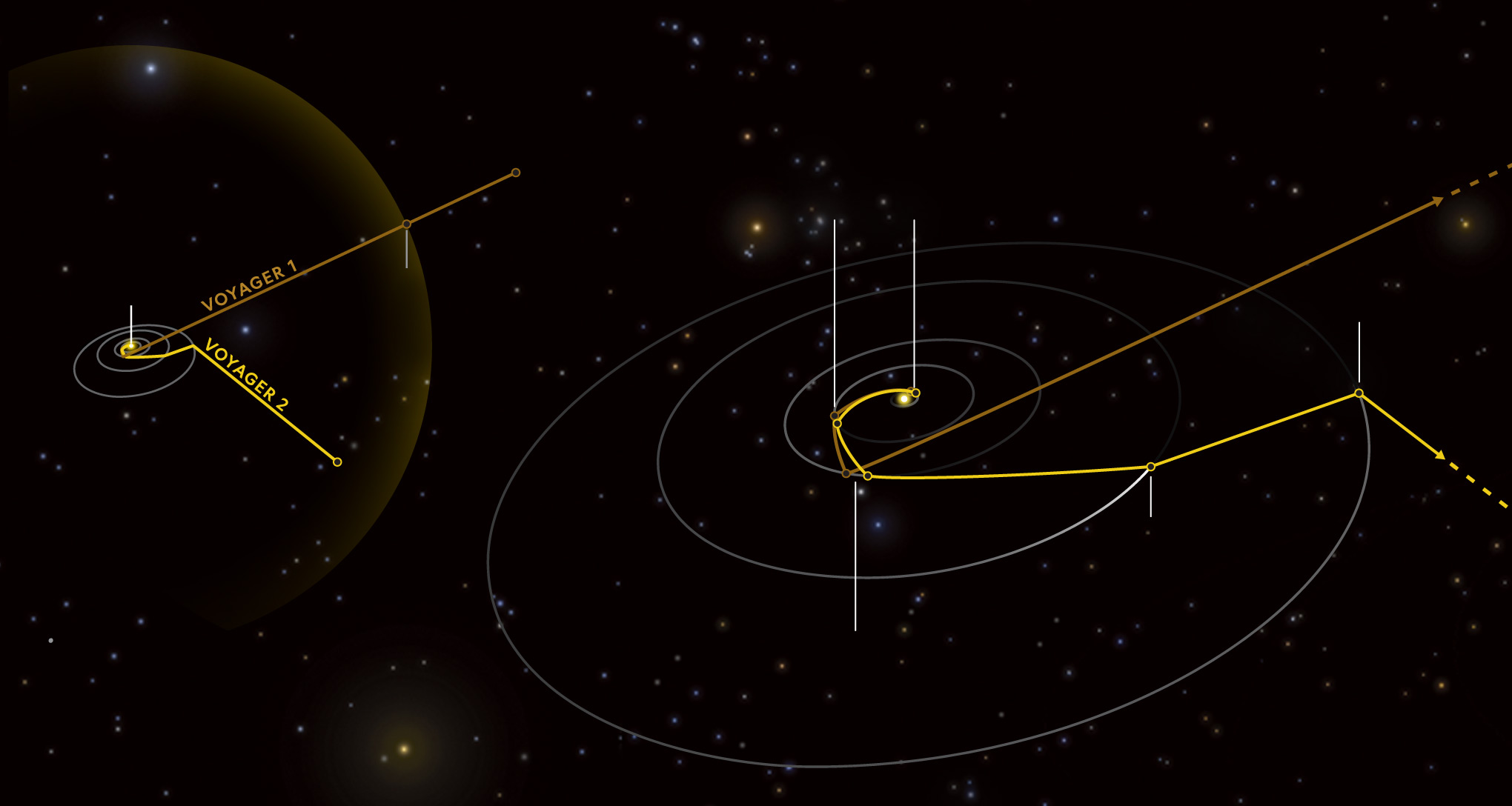 Voyagers 1 and 2 were launched 40 years ago on a mission to explore the outer solar system. After encountering Saturn, Voyager 1 angled upward. Voyager 2 went on to visit Uranus and Neptune before angling downward.

To make sense of Voyager 2’s latest findings, it helps to know that the sun isn’t a quietly burning ball of light. Our star is a raging nuclear furnace hurtling through the galaxy at about 450,000 miles an hour as it orbits the galactic center.

The sun is also rent through with twisted, braided magnetic fields and, as a result, its surface constantly throws off a breeze of electrically charged particles called the solar wind. This gust rushes out in all directions, carrying the sun’s magnetic field with it. Eventually, the solar wind smashes into the interstellar medium, the debris from ancient stellar explosions that lurks in the spaces between stars.

Like oil and water, the solar wind and the interstellar medium don’t perfectly mix, so the solar wind forms a bubble within the interstellar medium called the heliosphere. Based on Voyager data, this bubble extends about 11 billion miles from the sun at its leading edge, surrounding the sun, all eight planets, and much of the outer objects orbiting our star. Good thing, too: The protective heliosphere shields everything inside it, including our fragile DNA, from most of the galaxy’s highest-energy radiation.

HISTORY
Exclusive: This 7,000-year-old woman was among Sweden’s last hunter-gatherers
SCIENCE
If alien life exists in our solar system, it may look like this
ANIMALS
Fanged mouse-deer identified after vanishing for a generation

The heliosphere’s outermost edge, called the heliopause, marks the start of interstellar space. Understanding this threshold has implications for our picture of the sun’s journey through the galaxy, which in turn can tell us more about the situations of other stars scattered across the cosmos.

“We are trying to understand the nature of that boundary, where these two winds collide and mix,” Stone said during the briefing. “How do they mix, and how much spillage is there from inside to outside the bubble, and from outside the bubble to inside?”

Scientists got their first good look at the heliopause on August 25, 2012, when Voyager 1 first entered interstellar space. What they began to see left them scratching their heads. For instance, researchers now know that the interstellar magnetic field is about two to three times stronger than expected, which means, in turn, that interstellar particles exert up to ten times as much pressure on our heliosphere than previously thought.

“It is our first platform to actually experience the interstellar medium, so it is quite literally a pathfinder for us,” says heliophysicist Patrick Koehn, a program scientist at NASA headquarters.

But for all that Voyager 1 upended expectations, its revelations were incomplete. Back in 1980, its instrument that measured the temperature of plasmas stopped working. Voyager 2’s plasma instrument is still working just fine, though, so when it crossed the heliopause on November 5, 2018, scientists could get a much better look at this border.

For the first time, researchers could see that as an object gets within 140 million miles of the heliopause, the plasma surrounding it slows, heats up, and gets more dense. And on the other side of the boundary, the interstellar medium is at least 54,000 degrees Fahrenheit, which is hotter than expected. However, this plasma is so thin and diffuse, the average temperature around the Voyager probes remains extremely cold.

Another mystery appeared as Voyager 1 came within 800 million miles of the heliopause, where it entered a limbo-like area in which the outbound solar wind slowed to a crawl. Before it crossed the heliopause, Voyager 2 saw the solar wind form an altogether different kind of layer that, oddly, was nearly the same width as the stagnant one seen by Voyager 1.

“That is very, very weird,” Koehn says. “It really shows us that we need more data.”

But while other spacecraft are currently outward bound, they won’t be able to return data from the heliopause. NASA’s New Horizons spacecraft is zooming out of the solar system at more than 31,000 miles an hour, and when it runs out of power in the 2030s, it’ll fall silent more than a billion miles short of the heliosphere’s outer edge. That’s why Voyager scientists and others are calling for a follow-up interstellar probe. The goal: a 50-year, multi-generation mission that explores the outer solar system on its way into unexplored regions beyond the solar wind.

“Here’s an entire bubble, [and] we only crossed it with two points,” study coauthor Stamatios Krimigis, the emeritus head of the Johns Hopkins University Applied Physics Laboratory’s space department, said at the briefing. “Two examples are not enough.”

A new generation of scientists is eager to run with the baton—including Rankin, who did her Ph.D. at Caltech with Voyager 1’s interstellar data with Stone as her adviser.

“It was amazing to work on this cutting-edge data from spacecraft that were launched before I was born and still doing amazing science,” she says. “I’m just really thankful for all the people who have spent so much time on Voyager.”