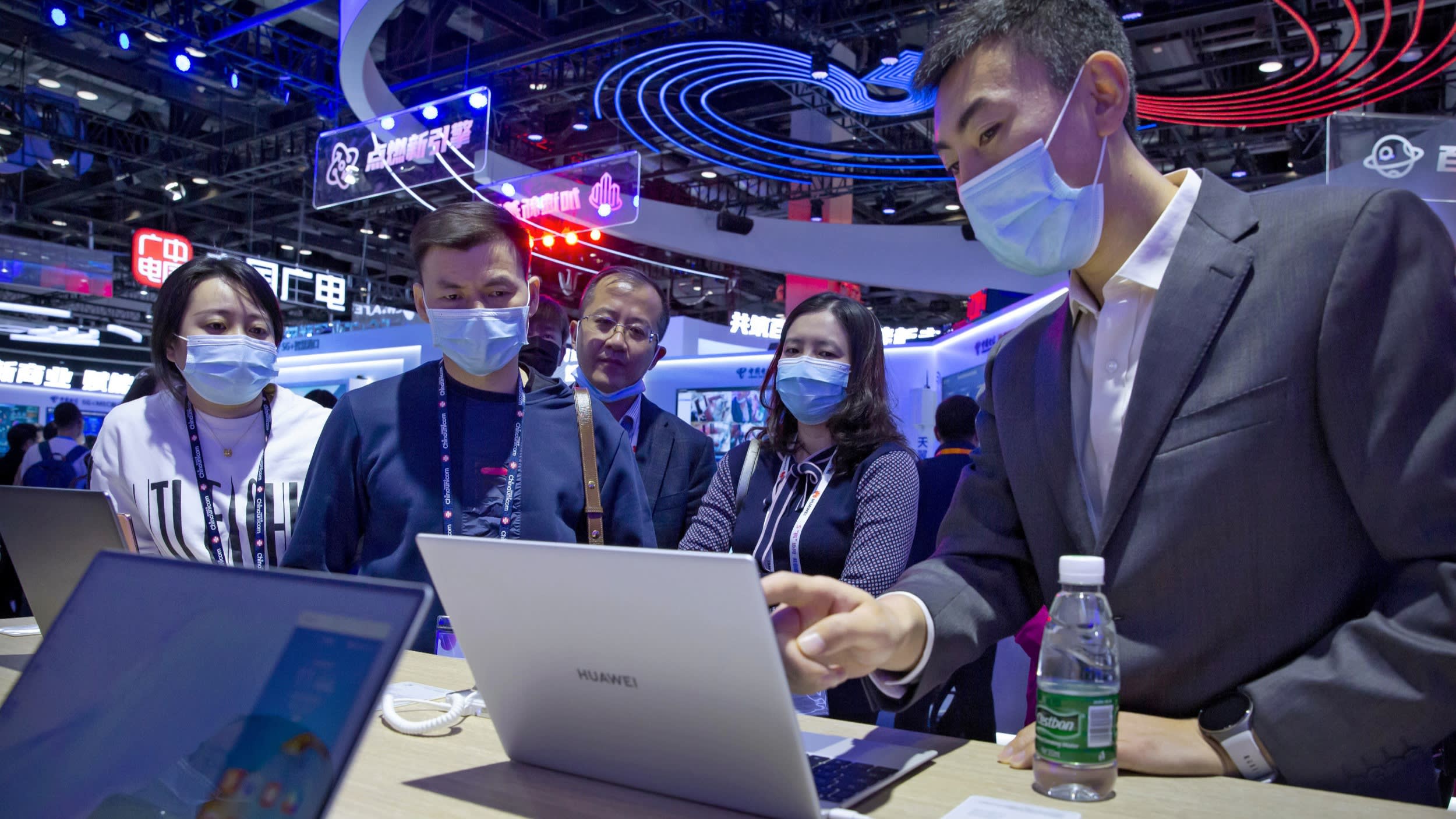 TORU TSUNASHIMA, Nikkei staff writerNovember 24, 2020 06:23 JSTUpdated on November 25, 2020 20:30 JST
TOKYO — Back in 2001, the U.S. was the dominant country when it came to cross-border data flows. It was the early days of the internet boom, and America was where tech companies and tech-savvy consumers were.

But the global data order is changing rapidly.

China now accounts for 23% of cross-border data flows, nearly twice the share of the U.S., which ranks a distant second with 12%.

And the Chinese lead could turn into a dominant advantage as the formerly world-spanning internet shatters into the “splinternet”: a balkanized mosaic of information networks marked off by national borders. The source of Beijing’s power lies in its connections with the rest of Asia. While the U.S. accounted for 45% of data flows in and out of China in 2001, that figure dropped to just 25% last year. Asian countries now make up more than half the total, particularly Vietnam at 17% and Singapore at 15%.

China surged past the U.S. in 2014, and its influence outside its borders has only grown in the ensuing years.

What does that mean?

As China becomes a global data superpower, it will control huge quantities of a resource that will be invaluable to its future economic competitiveness. Data from foreign sources can provide an edge in developing artificial intelligence and information technologies. 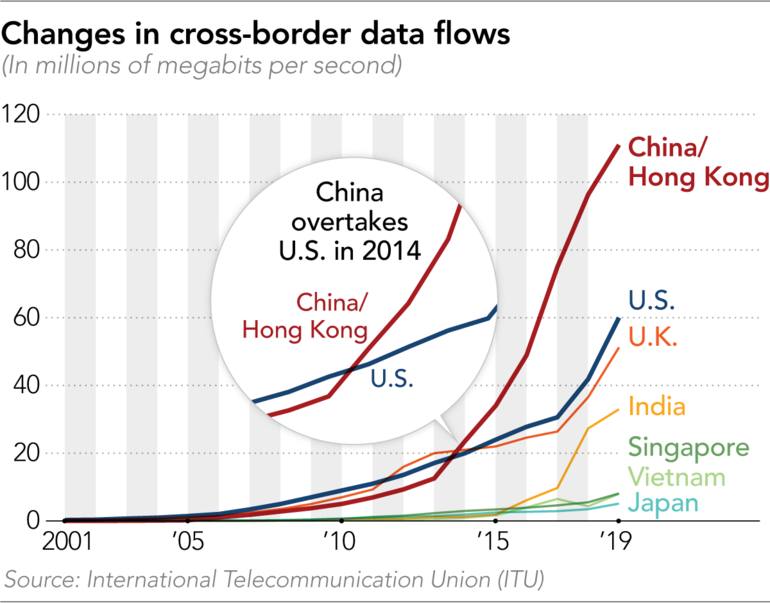 Furthermore, China could be the biggest beneficiary of a fractured internet.

Earlier this year, U.S. President Donald Trump issued an executive order that sought to ban the Chinese messaging app WeChat, which millions in America rely on in their daily lives.

The step was just one of Washington’s moves to block Chinese apps and keep China out of its network infrastructure. But its efforts to build a united front of liberal democracies to this end have not fared well.

The European Court of Justice in July struck down a data privacy agreement negotiated between the U.S. and the European Union, citing inadequate American protections for personal data. The court took issue with the U.S. surveilling foreign citizens to monitor possible terrorist threats — an ironic development, given the similar concerns Washington has raised against Beijing.

U.S. Commerce Secretary Wilbur Ross responded that he was “deeply disappointed” by the ruling. 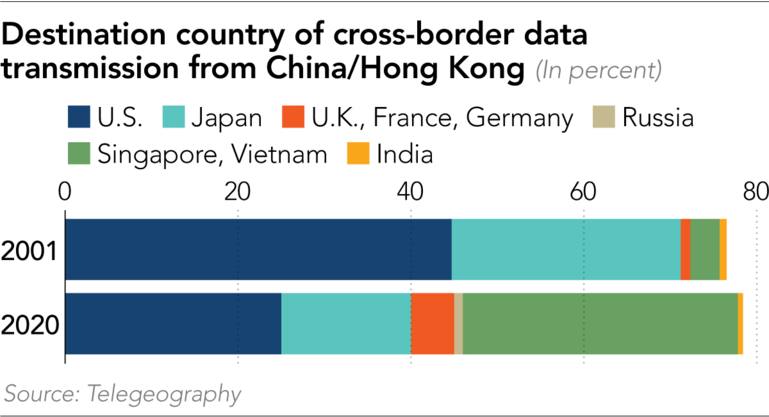 Disruptions to the global data flows have affected the sharing of knowledge over the internet. For example, more than 50 million programmers and others around the world use a platform called GitHub to collaborate on such activities as writing code, leading to numerous technological advances. But Chinese engineers are now starting to use a separate Chinese platform, according to Charlie Dai, an analyst at U.S. research company Forrester.

Worried that Sino-American tensions could impact access to GitHub, which is owned by Microsoft, some users have switched to a similar Chinese platform called Gitee instead.

A fractured internet means countries that can collect large amounts of data within their own borders will have an advantage in developing artificial intelligence and other technologies. Nowhere more so than China, with 900 million people on the internet.

There are already signs that population is becoming a key driver in innovation and economic growth. China’s share in the top 10% of most-cited papers on AI came to 26.5% in 2018, according to the Allen Institute for Artificial Intelligence, fast approaching the American share of 29%. Allen Institute senior program manager Carissa Schoenick predicted in 2019 that China was poised to unseat the U.S. as the world’s leader in the coming years. In addition to favoring the world’s most populous countries, internet divisions impact the world’s ability to work together on big-picture problems like the coronavirus pandemic, environmental degradation and inequality.

The Chinese government had generally avoided interfering too heavily in the country’s tech sector but abruptly cracked down this month, torpedoing a planned initial public offering by Ant. Beijing’s alternative information ecosystem continues to swell, with the government vacuuming up every morsel of data it can.

For Japan, which had been pushing for “data free flow with trust,” or DFFT — an idea put forth by then-Prime Minister Shinzo Abe — the setbacks have been disappointing.

“The ‘T’ in DFFT is gone,” said an official at Japan’s Ministry of Economy, Trade and Industry, noting that now India and other emerging countries are also snubbing the initiative.

“If we give up on building a better web now, then the web will not have failed us. We will have failed the web,” warns Tim Berners-Lee, who invented the web. Cyber rifts could impact not only each nation’s ability to navigate an increasingly digital world, but also humanity’s progress as a whole. (Learn more with a graphic-rich version of this article.)

The Nikkei’s ongoing series Century of Data was a 2019 winner of the Japan Newspaper Publishers & Editors Association (NSK) Awards, the country’s most prestigious journalism prizes.