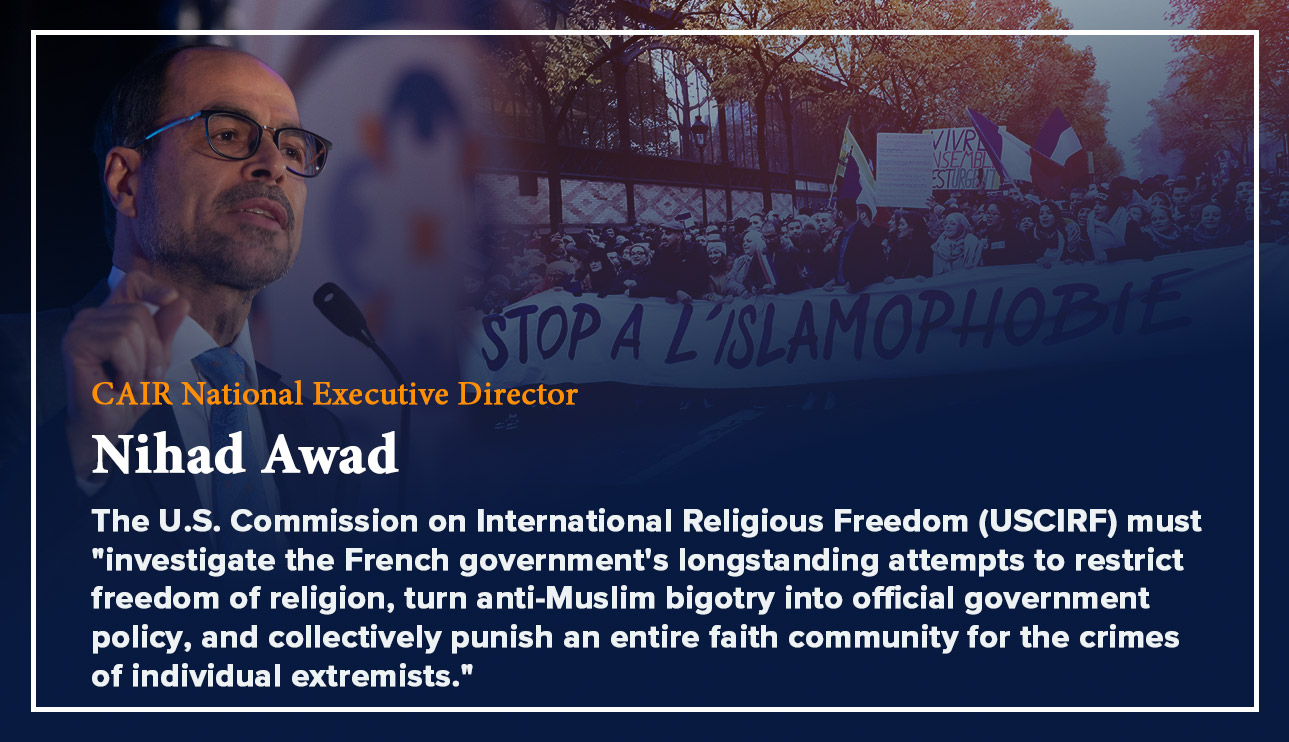 In the days since the horrific murder of educator Samuel Paty, France has arrested numerous French Muslims with no apparent connection to the crime and threatened to shut down various French Muslim organizations, including the country’s largest anti-Islamophobia group.

“We encourage USCIFR to investigate and oppose the French government’s ongoing campaign of collective punishment, as well as its history of restricting freedom of religion: kicking students who wear crosses, kippas and hijabs out of school, barring public servants from wearing such signs of their faith, criminalizing religious face veils while requiring medical face masks, and arresting Muslim women for wearing full-body swimsuits at the beach, among other irrational policies.”

“I am writing to request that the U.S. Commission on International Religious Freedom (USCIRF) investigate the French government’s longstanding attempts to restrict freedom of religion, turn anti-Muslim bigotry into official government policy, and collectively punish an entire faith community for the crimes of individual extremists.

“Due to such illiberal and irrational anti-religion policies, we also strongly encourage USCIRF to recommend that the U.S. Department of State list France among the Countries of Particular Concern.

“The United States is widely respected as an international leader in protecting and upholding religious freedom here and abroad. In recent years, our nation has condemned the persecution of Muslim minorities, including Uyghurs in China, Rohingya in Burma, and Muslims in India. We are now asking the USCIRF to address the anti-Muslim state policies of the government of France. . .

“Over the past twenty years, France has implemented numerous laws designed to limit and punish the free exercise of religion, especially among Muslims. For example, France has banned students, teachers, and public servants from wearing visible signs of their faith, including hijabs and veils, at school or at work. French law now even forbids religious minorities from exercising their right to wear religious face veils in public. Muslim women in some areas of France have also been fined by police for wearing full-body swimsuits.

“Earlier this month, President of France Emmanuel Macron continued this pattern of persecuting French Muslims by launching a public campaign of anti-Islam political rhetoric targeting the community. Macron fanned the flames of anti-Muslim bigotry in France and around the world by claiming, ‘Islam is a religion that is in crisis all over the world today, we are not just seeing this in our country’ and has expressed concern of ‘Islamic separatism’ and called to ‘liberate’ Islam.

“Within France, this has led many to rightfully accuse Macron of pandering to far-right extremists and attempting to distract French citizens from his government’s dismantling of public services, rising unemployment, poor economy, and ineffective response to the COVID-19 pandemic.

“To justify its behavior, the government of France is making sweeping Islamophobic statements about the ways in which French mosques operate and are painting religious leaders and communities as a threat to the secular state. . .

“The French government’s ongoing efforts to single out the French Muslim community comes with significant consequences. In 2017, the Collective Against Islamophobia in Paris processed 349 cases in which discrimination represented 78% of Islamophobic attacks.

“Moreover, on Sunday two French Muslim women of Algerian descent were stabbed in what appears to be a racially and religiously motivated attack in front of the Eiffel Tower…”